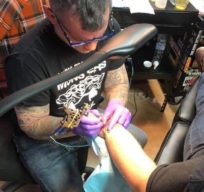 Derrick has been tattooing since the early 2000’s. He got his start here in the Low Country apprenticing under several OG California Tattoo greats. He was originally a tile contractor by day and a MMA fighter by night, but had an extensive art background and interest in all things tattoo culture. A large part of his career has been spent here at California Tattoo eager to make your tattoo ideas into a beautiful reality. His craft thrives in our fast paced “street shop” setting. Derrick specializes in traditional tattoos with an emphasis on pin-ups and nautical themes and he also enjoys traditional Japanese styles.